Michael describes the process of creating pinball machines with his year 10 students at St. Francis College

Creating a pinball machine with our St Francis students was a brilliant idea upon conception at the start of the year when planning. We could see all of the possibilities for learning for the students: electronics, creativity, woodwork, laser cutting and engraving, and 3D printing. And we knew it would take some time and effort to get it off the ground. Little did we know!

The students loved the idea of making a pinball machine.

We started off by showing videos on some of the best pinball machines ever made and how typical pinball machines and parts work. Because of the cost, size and time projected we asked the students to work in groups of three. They were so eager that we had students fighting over who would take it home, or they were working out rotations of who would have it at home and for how long.

To get a better understanding of the mechanics of a pinball machine we set a research task for students to investigate appropriate ways to make the flippers and ball shooter work. This was a steep learning curve that required much scaffolding, as it appeared that the generation of students we were teaching didn’t do what we did as kids in pulling things apart to see how they worked, and the students growing up in an age where nearly everything is computerised there was little understanding or curiosity in working out how these parts work or could work.

Then came the planning stage for making the pinball machines. Our students got a real buzz out of the possibilities in what they could create, including various themes and the different ways to decorate and make the pinball machine interesting to play. All while this was happening, Jason, our workshop teacher aid, was working out how to make working flippers and a ball shooter while I investigated how to get some sort of scoring system. I quickly discovered that this was over my head and I needed help in trying to find a solution. I went online looking for existing solutions but couldn’t find anything that suited. I posted to groups, contacted engineers and even tried Airtasker to find someone who could come up with a solution. I didn’t have a hard budget but knew that this project, or at least the scoring component (which I felt was pivotal to making the pinball machine appealing to the students in an age of computer games, and provided the element of competition, which I felt is what made pinball machines enjoyable to play) was dead in the water unless I could find a reasonably cheap solution. The engineers and other people I contacted either didn’t really understand what I was trying to achieve or what they were proposing was too expensive to be making 6 machines per class. Then I remembered Karsten Schulz, the instructor I met in November the previous year in a Digital Technology PD. A guy who knew a lot of stuff about a lot of things. I thought that he’d be able to at least point me in the right direction. In true Karsten style, he asked a few questions and then came up with a solution. A life saver and for only $35 per scoring unit!

Left: The scoring unit. Adapted from the B4 CPU Kit.

Right: The scoring unit within the casing (3D designed in TinkerCad) attached to a display board.

We got into the workshop once we thought we were ready to start making. Our students followed shortly after me and Jason’s prototype. As this was new territory for us and we’d not found much done before us, the students worked closely behind us. Then came the problems. Our biggest problem was the flippers. The ball shooter worked brilliantly, but the flippers, which had worked fine in prototype, weren't going to plan for the students and ended up being too problematic to be feasible as the design stood. Jason and I spent hours trying to solve problems, with one solution leading to another problem. This was also crucial to the success of the project, and without working flippers the project was doomed. We did however come to a working solution which enabled the flippers to work without having to totally re-engineer the flipper system. Lock-tite was our friend and savour! No sooner had we found the solution I woke during the night at about 3am with a new and improved flipper system – all 3D printed and created in TinkerCad. All set for next year! I haven’t mentioned it before, but TinkerCad is brilliant for creating the scoring case and modifying parts. A great resource for all schools, and the bonus is its absolutely free!

Above: my 3D designed scoring case for the pinball machine.

The next major problem we came across were the switches for activating the scoring. We had bought a few micro switches, but at about $4 a pop we thought we would go a cheaper option. Plus we thought we would make some bumpers (that look like mushrooms) that activate a score by completing the circuit when hit by the ball. These worked well in testing, but we soon found out that our testing conditions didn’t quite replicate the environment they were getting installed into. Jason started pulling his hair out at this stage as he’s spent a lot of time making several of these in preparation, and before he came up with his solution at about 3am the next night had pulled all of them apart. The phrase “sleep on it” never rang more true.

Above: One of Jason’s scoring bumper switches.

Finally we created working pinball machines. As good as they are we know that they will be even better next year. As much of a headache this project has caused us at times it has been a great project and one we’ve been excited about in the possibilities of what can be done. The problem solving has been great overall and the sort of thing that tinkerers and hobbyists would love. As for Jason and I we are looking forward to what we can create with the kids next year in Pinball Machine project, version 2.0.

Above: Two of the completed pinball machines minus the ball catchers. 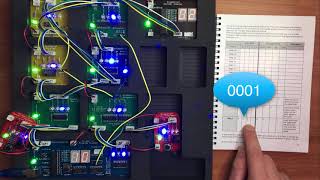 State of the Platform - MyComputerBrain

Networking with the B4